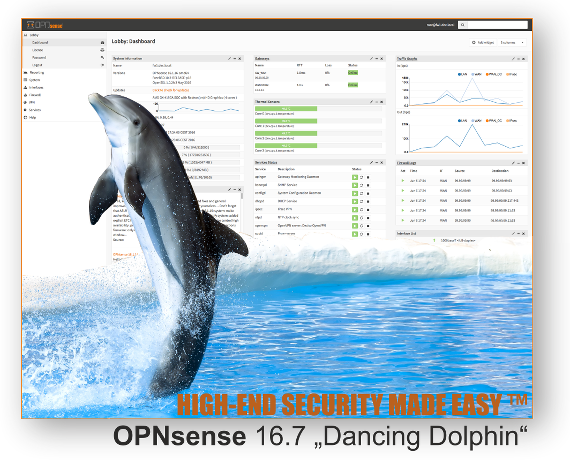 Since the previous major release, its impressive feature set has been expanded with category based web filtering, two-factor authentication (2FA), built-in bandwidth monitoring, netflow exporter, ICAP support and a high-performance load balancer plugin based upon HAProxy.

A new pattern-matching library called Hyperscan was introduced to dramatically improve the performance of the Intrusion Prevention System.

The user experience has been improved for all visible GUI pages including a completely revamped dashboard with multi-column and drag & drop support. At the same time multi-language support has been extended with the completion of Japanese and Russian.

For developers the RESTful API has been extended, new development tools made available and a pluggable infrastructure was added for services, syslog and interfaces.

OPNsense 16.7 is equipped with a reliable and secure update mechanism to provide weekly security updates. The latest release is based upon FreeBSD 10.3 for long-term support and includes HardenedBSD’s ASLR implementation enhancing the base systems protection against buffer overflow attacks.

“With the ‘Dancing Dolphin’, OPNsense is ready for the Enterprise” – says Jos Schellevis, Deciso’s CTO.- “We have proven that high-end security doesn’t need to be difficult or expensive. With the help of the community OPNsense is rapidly becoming a widely used open source security and firewall platform.“

Deciso is the company that founded the OPNsense project and offers turnkey solutions as well as commercial support and oem services.