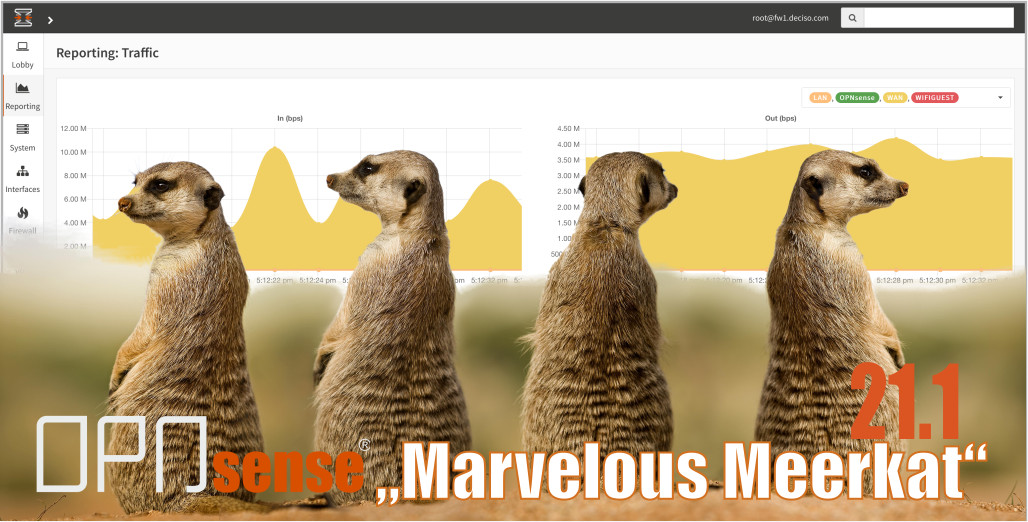 The latest release is packed with improvements, new and updated plugins as well as new drivers to support the upcoming official certified OPNsense hardware.

Amongst the improvements are the enhanced filtering mechanism for the firewall live logs and a new serial installer that supports booting from UEFI only systems. Installing on a modern headless system has never been easier.

New features include live traffic graphs as well support for multiple categories in both firewall rules.

For improved security the graphical user interface now defaults to hardened settings with TLS 1.2 as minimum and with strong ciphers.

Organizations and users looking for the latest and greatest on Virtual Private Networking will be pleased to know OPNsense includes IPsec, OpenVPN and also has been supporting Wireguard since 2019.

The Meerkat resembles our community, as there are few animals who work so well together. They are known for standing upright when on sentry duty. These sentinels provide an early warning system against predators with a distinct alarm to alert their pack about the type of danger.

“The Meerkat resembles our community, as there are few animals who work so well together. They are known for standing upright when on sentry duty. These sentinels provide an early warning system against predators with a distinct alarm to alert their pack about the type of danger.”

This is where the Intrusion Prevention System – that’s at the heart of OPNsense – gets its name from.
Suricata – another name for the Meerkat – has been an integral part of the project since 2016 to protect users against malicious traffic.  A marvelous detection and prevention system provided by the Open Information Security Foundation. This release honors the hard work of the OISF community and introduces new policies to harness Suricata’s power with even more ease.

OPNsense is the fastest growing open-source security platform with an Open Source Initiative (OSI) approved 2-clause or simplified BSD license. Its feature set is extensive and ranges from router/firewall to inline intrusion detection and prevention.

The project is defined by its innovation through modularizing and hardening, simple and reliable firmware upgrades, multi-language support, hardened security, fast adoption of upstream software updates as well as a large and friendly community.

And with the “Marvelous Meerkat”, the developer’s documentation has been extended with fronted components.